My mum is rather terrific really. Maybe it’s because she’s an Irish mammy, but we chat almost every day, despite living only 12 miles apart. If ever feeling despondent, as I often am, what with being prone to fits of apocalyptic despair, I can always pick up the phone, and offload my woes. Usually the chat goes:

AAI: Ach, you don’t sound at all good today. Sure why would you, in this miserable climate. Just dreadful. It would blow you away down here. And it’s lashing. I hope you had a coat on you when you dropped off those children. And a hat. That cat’s been in and out like a yoyo, I’ve had to dry her off with kitchen roll, twice! Totally drenched, the stupid creature. She’s up now, having a lie down on MY CLEAN DUVET. It’s a disgrace. But she’s only a wee P.C.* you know, so I’ll leave her to it. (Brief intake of breath.) Now what’s the matter?

ME: Mutter incoherently about Russia flexing its muscles in the Crimea and Syria and the possibility of a Third World War, while admitting horrific feelings of guilt for being more worried about for my own welfare in the light of nuclear annihilation than the current plight of the besieged in Aleppo.

AAI: What’s annoying you? Russia? I see you still have that BBC news app on your phone then. Turn it off! Get rid! You have enough on your plate. Do you not have those wee girls and a husband to tend to? You can’t go taking on the affairs of the world. Do you think people in days gone by had the time to ponder life’s calamities? Were your Nana and the aunties worrying about world affairs when your granddad had his bad legs and they were trying to run a farm while looking after sickly hens?

AAI- Have I never told you about the time your Nana bought a load of hens and they all took the paralysis and couldn’t stand? Oh it was desperate, sure they all went and died then, and not an egg.

ME- Not a leg either by the sounds of it.

AAI- Hmmm, (then, after the briefest of pauses for inhalation), mind you, the Russians have always been up to no good. Let me get your dad: here he is now, would you get your nose out of that book when I‘m asking you something? It’s SWB, she’s worried about a war. Do you think there’s another war coming? (Incomprehensible chatter, as though they are discussing this week’s grocery shop). Ahem, so he says no, he doesn’t think so. What’s that? No, he’s stopped watching the news, actually, so he’s not sure what you’re on about, but says he it’s unlikely. He’s all about the Napoleonic Wars at the moment. Now, if you were to ask him about Wellington, you’d be told chapter and verse. Listen, how did we get on to this anyway? I’m thinking it’s time for lunch. Have you eaten or will we just pop into ASDA and come on up and see you? I’ll get some fruit and custard tarts for the girls.

By the time you’ve listened to that monologue you’re kind of past caring about pending doom and so just make another cup of tea, contemplating the madness on your doorstep instead of further afield. As a tactic of diversion then, it’s probably quite effective, on my mother’s part.

* P.C.- Pussy Cat. Affectionate term for any cat in the vicinity.

SWB gets fanciful and festive 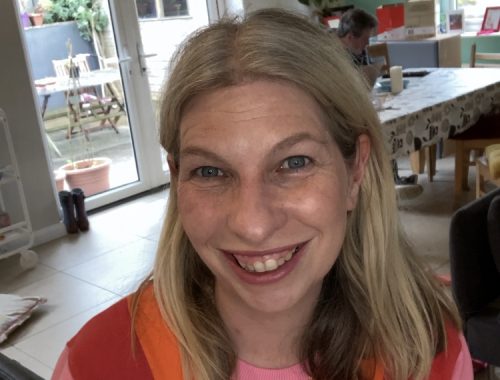 SWB on a New Look Blog